It has been a year since the Brexit vote. It is counter-intuitive that with the seemingly ever-increasing political uncertainty we have such strong positive market tailwinds. I remember very clearly taking phone calls from nervous investors who feared a repeat of 2008 due to the surprise vote. We recommended staying invested and undeniably, that was the right thing to do. If there is one thing I have learnt over my 17 years in the wealth management industry, it is that when the market is the scariest and the newspapers are using the most sensationalist fearful headlines - it is the time to buy, not sell.

In our Q2 2016 review, I wrote about the possibility of a “non-Brexit Brexit”, which basically hinted that the process is so complicated that it may not actually happen, and if it did happen it would happen very slowly. Seems that was spot on. A year later, with a change in leadership and a hung parliament in Britain, we still have no real clarity on what Brexit means. I suspect now the momentum is irreversible, but politically this can take a very long time. The market has become used to the idea. The politicians are starting to use it as a voting tool, using phrases like “people’s Brexit” or “fair Brexit” without qualifying that Brexit terms still have to be negotiated. Unfortunately, we have become used to this type of irresponsible leadership. Nonetheless, Pioneer has recently included an overweight position in the FTSE 100, meaning we bought UK stocks. This is because on a valuation basis, the UK is more attractive than the USA. Why?

It is anticipated that the current situation will continue. Theresa May’s government gambled, called a snap election in April and expected to win big. Now they do not have the majority they need to force Brexit through. This means that a “hard Brexit” is unlikely. If Jeremy Corbyn, the Labor Party leader, continues to consolidate power, then it seems that a “no deal Brexit” may be worse than a “bad deal Brexit”. This is more of a concern than Brexit itself. However, we feel that on balance of risks a small allocation to the FTSE is justified.

Those of you who do not like technical stuff can stop reading here. However, we thought a few words on valuation were important at this stage so that investors can get a better sense of the market situation. Intuitively we all feel the market is high. We have had one of the longest bull runs in history and whilst we believe in long-term asset allocation - meaning don’t even try to time the market - we need to be at least cognizant of market cycles.

There are many valuation tools used by the industry. The most commonly used is Price to Earnings (PE). This ratio indicates how many years' earnings are reflected in the price, i.e. if a company has a PE of 20 it means 20 years at the current profit level (not dividend) is reflected in the price. In my opinion, as an accountant and a CFA, this is the most horrible and meaningless measure that should never be used on its own. If you traded based on PE you would never have bought Apple, Google, Facebook or Amazon and many other star performers. Amazon is currently trading at over 200, and has maintained a very high PE because of its aggressive growth plans. Apple has a much more sensible number of about 17, whilst a traditional company like General Electric has a PE of 18. The problem with PE is that it is very short-term oriented, as the volatility of short-term earnings can be very high even for large companies.

A professor at Yale named Robert Shiller tried to improve PE and came up with the Shiller PE, which is a cyclically adjusted PE ratio derived by comparing the Index’s current price level to average earnings over the prior 10 years, adjusted for inflation (instead of latest earnings like PE). This is a more reliable indicator of valuation. However, it should also not be used in complete isolation and certainly cannot be used for short-term timing. It is more useful for setting an expectation about longer-term earnings from the current level. In the graph below, you can see the Shiller PE in long-term historical context (for the USA main market - S&P 500). At the current levels in the high twenties, we can see that we are considerably above the long-term average.

The counter-argument against excessive concern with the current valuation levels is the low interest rate environment. Low interest rates have created “asset inflation” and will sustain higher relative valuations longer than high interest-rate levels. Our thesis is that interest rates are going to remain relatively low for longer so we can stay allocated to the S&P. However, we are concerned about future returns, so we are looking elsewhere. The FTSE 100 Shiller PE is at a much more comfortable 14, further reinforcing our latest tactical play. From an advisory perspective, USD-based clients should probably be more cautious with USA equity allocations than they would otherwise be.

Market performance in 2017 YTD and outlook

2017 so far has been an excellent year performance-wise. Having said that, we feel that investors should lower their expectations for the second half of 2017. It may be that the old adage “sell in May and go away” will be even truer in 2017 than in previous years. Interestingly, the average returns for the 23 major market countries from 2001 to 2016 (unweighted) are considerable better from November to April than May to October - 7.4% vs 1.5%. 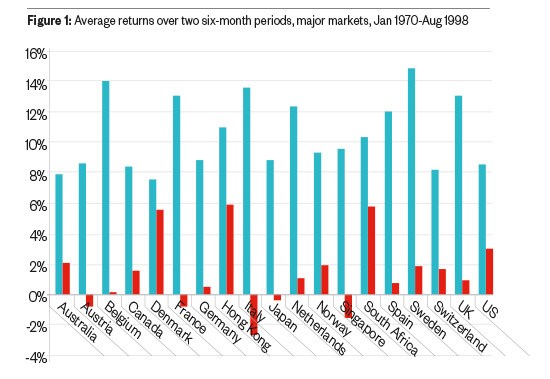 However, the study that published this found that selling in May does not deliver abnormal returns; it merely reduces significantly the riskiness of returns. This was part of our motivation for reducing equities in April. We are only partly replacing that allocation with FTSE exposure for the reasons explained above.

As you can see, we have benefited from positive tail winds in most asset classes. Higher risk asset classes like Emerging Market equities and bonds have done exceptionally well, bridging the gap as they had been lagging somewhat behind.

The local economy appears to be excellent, with the economic data continuing to indicate strong growth, along with a trend of improvement in industry, commerce, tourism, export of services and government revenues from taxes. The surplus in the balance of payments (foreign trade) remained very high and the increase in high-tech exports did not halt. Nevertheless, continuing the trend of last year, the absence of conformity continues vis-à-vis the leading world indices, primarily in Europe and in the United States. Despite this, it can be stated positively that:

We believe that it is still important to maintain a substantial exposure to shares in Israel. The earnings of the local companies are anticipated to increase in view of the persistent improvement in the local economy and the assessment that the interest rate in Israel is not anticipated to rise during the coming year. Furthermore, it appears that equities of the real-estate sector are still attractive, principally because of a low interest environment in Israel. It is worthwhile to observe that, during this period, the local real estate market has been in a state of price stability, with a certain decline in demand and a shift of purchases of real estate by many young couples to the ”Buyer’s Price” Housing Program ("Mechir Lamishtaken"), which has not yet succeeded in proving itself.

The large-cap equites, particularly the pharmaceuticals such as Teva, Mylan and Perrigo, seem to be undervalued, and if there will be an upwards adjustment in the remainder of the year, the TA 25 Index will show an excess yield. With regard to the small-cap equity, it appears that the share prices must converge to the real value of the companies and, at the moment, there is an “over-valuation”. This does not mean that all of the small-cap equities must be sold immediately, but purchasing small-cap equities as a strategy seems to be wrong. Since it is possible to continue to find value in small-cap equities, we feel now is the time to choose active managers or perform an independent analysis of companies, so we can locate companies which are still being traded on an undervalued basis.

Moreover, corporate bonds all over the world also registered prominent price rises from the beginning of the year, caused first and foremost by the correlation between government and corporate bonds.

We estimate that we have already extracted most of the excess yield that can be generated by an investment in long-term government bonds. After extending the average duration of the bonds portfolio at the end of last year, we are presently realizing sizeable gains in this asset class and are slightly shortening the average duration of the government bonds portfolio. In the corporate bonds asset class we are also adopting a defensive approach, while selecting individual bonds which are worthy of investment and possess an appropriate yield, a task which is becoming more and more difficult. Conversely, we are avoiding investment in bonds of companies which are dependent on recycling and on raising new debt in order to repay old debt; those in areas which are sensitive to a rise in interest rates, such as real estate (with an emphasis on real-estate development); motor vehicles; and sectors at risk, such as communications and others.

The trend of the weakening dollar continued for the first half of 2017, and is not unique to the Israeli shekel alone, as the dollar weakened this year against the basket of currencies. Due to the high volatility that has been inherent lately in foreign currencies, we at Pioneer are managing foreign exposure (to the extent feasible) by means of investment instruments hedged to the main currency of the investment portfolio.

Summary of the leading indices

The aforementioned information is not a substitute for personal Investment marketing, which takes into account the particular circumstances and special needs of each person. The views expressed in this Review should be considered as market comment for the short term for information purposes only. As such the views herein may be subject to frequent change, are indicative only and no reliance should be placed thereon. This Review does not constitute legal, tax or accounting advice, or any investment recommendation, or any offer to buy or sell financial instruments of any kind, and does not take into account the investment objectives or needs of specific investors. Although this Review has been produced with all reasonable care, based on sources believed to be reliable, reflecting opinions at the time of its writing and subject to change at any time without prior notice, neither Pioneer Wealth Management nor any other entity or segment within the Pioneer International Group makes any representations or warranties as to the accuracy or completeness hereof and accepts no liability for any loss or damage which may arise from its use. The writer and the company are unaware of any conflict of interest at the time of publishing the above commentary.

Mike Ellis, originally from South Africa, joined Pioneer in March 2000 after working in the Private Banking & Trust industry in the UK. At Pioneer he was the group CFO for the better part of the last decade. Today Mike serves as a director and is the CIO.

Mike is a Chartered Accountant, a CFA charter holder and received his MBA from Tel Aviv University & Kellogg Business School. Mike is also an Oxford University Alumni having participated in the Said Business School's Global Investment Risk Management Program. In addition, Mike is a licensed Portfolio manager by the Israel Securities Authority.

For more information, please free to contact us or leave your details at the form below.